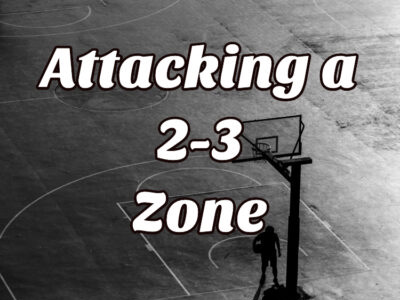 Coaching basketball at the youth level invariably involves dealing with zone defenses. The most common zone, 2-3, allows developing teams to hide certain players on the defensive end. It can also frustrate offenses to no end, especially if the offensive players tend to stick to their spots. So, as zones become more and more common even at the game’s highest levels, it’s integral that every coach knows exactly what they want to do when attacking a 2-3 zone.

One of the most common misconceptions to combating a good zone is the reliance on distance shooting. Teams might have a reliable zone-buster on their team, capable of consistently draining three-pointers. But the reality is most defenses would rather their opponent launch from deep rather than attack for higher percentage shots near the rim.

Keys to Attacking a 2-3 Zone

The first, and perhaps most important, key to attacking a 2-3 zone remains not settling for a three-point shot. Of course, if a three-pointer comes as a clean result of an offensive action, then by all means take it. But too often, teams settle for threes against zones because they can’t consistently pressure the paint. Approaching the zone with a one-pass-shot, or ball-reversal-shot, gets the defense off the hook.

Another key to combatting the zone is movement. Many times, the offensive players stand around and the zone shifts with each pass. The offense occupies set positions during the possession in hopes of finding an opening. The reality is, the openings won’t appear until more than just the ball moves. Accompanying a pass with a hard cut, filling the vacant spots, and forcing the defense to account for the movement stresses the rigidity of the zone.

A forgotten key against a zone defense is offensive rebounding. With defenders occupying designated areas instead of checking specific players, boxing out becomes problematic. Facing any zone creates lanes for offensive players to crash the boards on missed shots. The misses often result in scramble situations which could yield good scoring opportunities.

Continuity offenses stand as one of the most valuable approaches to attacking a 2-3 zone. These plays and sets create a rhythm and offensive flow that allows the team to stress the opposing defense. Offensive players know where to go as each pass is made within the continuity. The constant flow forces the defense to adjust, not only to each pass but also to each cut.

The set up for this continuity involves using a 1-3-1 counter to the 2-3 zone. 1 brings the ball down, with 2 and 3 on the wings. 4 occupies the high post, while 5 takes the low post. The initial action is a pass to either wing. 4 reads that initial pass, then cuts with the ball to that strong-side corner (or short corner).

From there, 5 presents as a low-post option and 2 cuts across from the opposite wing. 2 flashes to the open elbow area, while 1 makes a flare cut to the opposite wing. 3 reads the movement of the defense before making the next pass. If 2 doesn’t immediately receive the ball at the elbow, they lift to the top of the key.

The continuous element of this continuity offense comes if the defense recovers through the initial movement. 3 gets the ball to 2, who reverses to 1. As the ball switches sides, both 4 and 5 cut to the new strong side of the offense. 4 makes the baseline cut behind the zone, while 5 flashes to the opposite low post.

As the ball reverses, 3 makes the cut across, flashing to the open elbow. 2 makes a flare cut to the opposite wing, away from the ball.

Variations to this Continuity

A variation for this set could involve 5 cutting to the corner or short corner, then 4 cuts into the low post. This would be an option of the 4 and 5 are interchangeable on offense.

Another variation involves using a skip pass. If the defense overplays the elbow cut, or overplays the potential ball reversal at the top, the wing can use the skip pass to the opposite side. As that skip is happening, 4 and 5 make their cross cuts like normal.

A drawback to running continuity will always be the defense learning the cuts that are coming. Adding a slight variation to the progression might catch the defense off guard. Varying this continuity with an overload option should yield good looks.

In the overload, 1 makes the initial wing pass, but instead of cutting away, 1 cuts to the strong side corner. From there, 5 turns and screens the middle of the zone and 4 flashes to the open low post area. 2 can stay wide for a skip pass or cut up to the top of the key.

It’s key for the offensive players to be patient when attacking a 2-3 zone. Force the defense to adjust to each pass and cut before settling for a shot. The initial progression through the continuity might not yield openings, but as the offense moves, the defense must remained disciplined. If the defense is slow to adjust, the openings will be there.