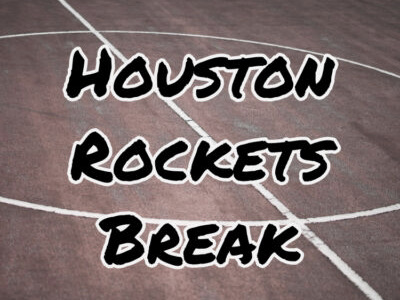 The fast break stands as of the most exciting plays in basketball. Regardless of a team’s skill level, the fast break injects a level of energy and excitement to any game. Coaches constantly scheme for ways to incorporate a fast break offense for their team, and the 2-Side Fast Break allows them to do just that.

This approach to fast break offense avoids players racing to balance the floor. Instead, the 2-side spaces the floor completely for the ball handler, allowing that player to dictate how the play unfolds. The ball handler attacks the paint, forcing the defense to choose which of the weak side options on the “two-side” will be left open.

The ball handler always looks to pressure the paint on the break, and if that means kicking the ball ahead, he makes the pass.

With the numbered break, the ball centers and the wings are occupied by runners. Sometimes, based on how a defensive possession played out, one of the wings would find themselves out of position. That player might cut across the floor, ultimately ruining some of the timing of the fast break. That relocating might short circuit the flow of the break and ruin whatever opportunities had presented themselves.

2-Side Fast Break Into Base Offense

Not every fast break opportunity will result in a basket, or even a good shot attempt. It’s important for players to understand that just because they’re on a break doesn’t mean they need to take a fast shot. Sometimes, the transition defense covers up any openings and the offense is forced to run a half-court set.

If the defense prevents a score or shot attempt, teams using the 2-side fast break set up can easily flow into a base offense.

The break itself saw the 2 and 3 both run the weak-side of the floor. 2 takes the corner and 3 the wing. 4 started as a rim runner on the break, but since nothing materialized, he cleared to the strong-side corner.

1 probed the defense, but ultimately is forced to run a set. To initiate this set, 1 finds the 5 man, who was trailing the fast break. The 2-side fast break flows immediately into a 5-out offensive set. 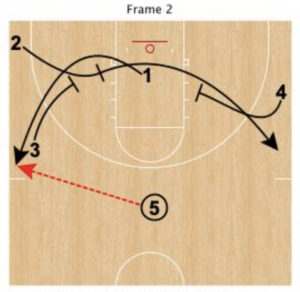 After making the centering pass to 5, 1 cuts through the lane.

As 1 makes his cut, he receives two screens away. 2 comes in to set the first screen, then 3 lowers to set another one.

This “floppy” action allows 1 to potentially get a look at a three-pointer on the wing. 2 cuts after his screen, and runs off a single screen from 4 on the opposite side.

From here, 5 looks to get the ball to 1 on the wing as he’s curling off the two screens. 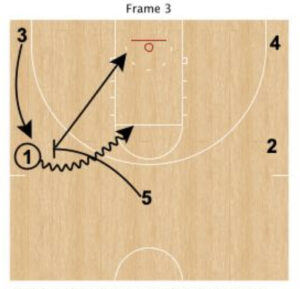 5 sprints into a ball screen after making the pass to 1. This action creates a three-man game on the strong side of the floor. It forces the defense to make decisions on how to cover up the sudden movement.

1 attacks the lane off the ball screen and 5 rolls. 3 lifts from the corner to the wing.

If this action unfolds quickly enough, 1 might find the lane opens thanks to a still scrambling defense.