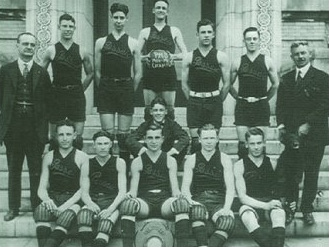 John Wooden, the Wizard of Westwood, is the coach by whom modern-day coaches are measured.  Winning ten of twelve NCAA Championships has immortalized his place in basketball history.  History, on the other hand, has not been as kind to another basketball wizard.  Ernest Blood, who dominated his peers to an even greater degree a few generations earlier in New Jersey, was called the Grey Thatched Wizard. 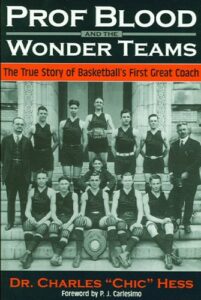 Few basketball purists in California are aware of this first wizard of the hardwood.  “Prof” was a shortened version of Professor. It was the name his players and students called him, but they spoke it reverently.  Passaic High School’s Grey Thatched Wizard was known for his all-around coaching acumen.  His teams enjoyed six undefeated seasons, and during another season, his team lost one game. His truncated stay at Passaic High School was a nonpareil 188-1. Furthermore, his teams would have undoubtedly won many more if jealous administrators and school board members hadn’t interfered.

A recently published book investigates the life of Prof Blood from his precocious athletic youth to the development of his avant-garde system of coaching.  In Prof Blood and the Wonder Teams: The True Story of Basketball’s First Great Coach, California coaches learn how and why this man was a generation ahead of his peers.  His methods and philosophies, which are not always followed today, are still very much worth learning and implementing.

For starters, Blood and Wooden were astrological Libras.  Their birth dates were October 5, 1872, and October 14, 1910, respectively.  If self-confidence is an essential ingredient to be a successful coach, then that explains the reason for their success. And their confidence was reflected in their teams’ demeanor.

Other similarities of these two Naismith Memorial Hall of Famers include:

Prof Blood often said: “I train boys for the game of life—not to win basketball games.  If I succeed in that, I have accomplished something worthwhile.” In Prof’s way of thinking, winning remained incidental.

Before little John Wooden was a twinkle in Joshua Hugh Wooden’s eye, Prof was equating basketball to the more important game of life.  While reading John Wooden’s book They Call Me Coach, you could insert Blood’s name for Wooden’s. You would be accurately describing Blood’s philosophy as well.

The major differences between the two behemoths of the game were their eras of dominance (’20s and ’60s) and their arenas (high school and college).  They had their priorities straight; they were teachers of the game of life.  The differences between the two lay in society’s memory.  Wooden has become a household name synonymous with basketball coaching excellence while Blood’s story has never accurately been told until now.  His accomplishments, contributions to the game and tribulations that have been lost in the annals of basketball have been resurrected in Prof Blood and the Wonder Teams: The Story of Basketball’s First Great Coach.

There isn’t a basketball coach who knows an X from an O who wouldn’t benefit from becoming more familiar with basketball’s first great coach.  Prof’s biography should be required reading for all high school coaches and fans.

Chic Hess, Ed. D. is the author of Prof Blood and the Wonder Teams: The True Story of Basketball’s First Great Coach, available at www.profblood.com.  Hess is a former NAIA College District and NABC-Kodak National Junior College Coach of the Year.