What is the Funnel Down Defense? 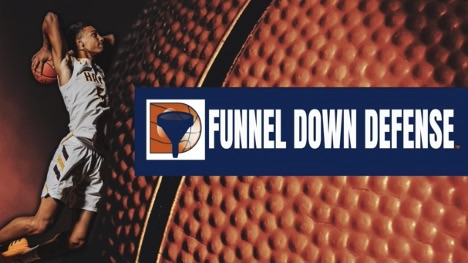 Basketball coaches often find themselves scheming for different ways to defeat the best team on their schedule. Many of those schemes are oriented around the defense. Coaches searching for ways to streamline their practices and become more efficient in their instruction need to look no further than the Funnel Down Defense. This approach provides coaches with a tried and true defense system that dictates pace and generates turnovers.

The Funnel Down Defense

Funnel Down uses something most basketball courts feature and many coaches dismiss: the volleyball lines. This defense focuses on shrinking the court for opposing offenses by pushes ball handlers outside of that key stretch of the floor. Funnel Down tries to prevent offenses from effectively using 60 percent of the court. Instead, it forces them to the perimeter, operating on just 40 percent of the floor.

This approach attempts to keep the ball on one side of the floor. It speeds up opposing offenses to the point where they become mistake-prone. It also shrinks the usable floor space for the offense.

Funnel Down is purposefully built to get opposing offenses out of their normal rhythm and flow, resulting in turnovers, and bad or rushed shots. When deployed in games that feature a shot clock, the effectiveness of this strategy is further amplified because the offense must spend time getting out of the trap zones.

Three Key Concepts of the Funnel Down Defense

1. Pin the ball on the sideline

2. Funnel the ball to the baseline

3. Trap and Rotate in the short corner

The design of this defense borrows its terminology from bowling. The task of the defense remains to “funnel” the ball along the “gutter” of the court to the baseline, where a trap awaits in the “strike zone.” Funnel Down seeks to keep the ball out of the “alley,” which is the main stretch of center court inside the volleyball lines. The traps occur in “strike zones” positioned at the short corners.

Ideally, defenders pressure the ball into the gutters, avoiding the centering pass. This is called a “pin.” This tactic overplays the ball handler away from the middle so that the ball can’t be swung.  Defenders stay ahead of the ball handlers by sprinting, not sliding, trying to stay half a body width ahead of the dribbler. This discourages penetration and funnels the ball toward the trap areas.

The defender “up the line” covers a man below the ball level on the court. This defender needs to remain between his man and the ball in order to help. The defenders continue to “funnel” the ball along the sideline, encouraging the dribblers to head toward the baseline. Once the ball enters the “strike zone” in the short corner, that triggers a trap and weak side rotation.

For more on how to implement this game-changing defensive system, Click Below for the Limited Time Funnel Down Defense Offer!

Click Here for More about the Funnel Down Defense!