Using The Funnel Down Defense

Scheming the right defensive system for your team remains one of the most important parts of preseason preparation for any basketball coach. While defensive principles may largely be the same from year to year, the athletes on the team might not be. Coaches must gear their strategies and approaches to fit the capabilities of their players. That makes systems like the Funnel Down Defense so valuable. Funnel Down stands as a versatile defensive weapon for any team, no matter the level.

The Funnel Down Defense 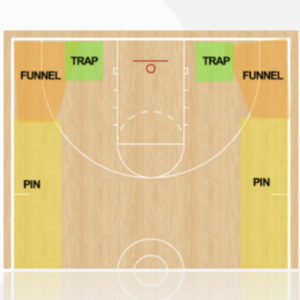 The basic principle of this defensive set up is to prevent opposing offenses from comfortably using the middle of the floor. Funnel Down creates “gutters” outside the volleyball lines, which are present on most high school and even college courts. Defenders force dribblers into these gutters and funnel them down the line to the next man. The ball is pushed down to the baseline and toward “strike zones,” or trap areas in the short corner.

Ideally, the offense never centers the ball, or swings the ball to the weak side of the floor. This defense focuses on shrinking the court for opposing offenses. Funnel Down tries to prevent offenses from effectively using 60 percent of the court.

Funnel Down is purposefully built to get opposing offenses out of their normal rhythm and flow, resulting in turnovers, and bad or rushed shots. When deployed in games that feature a shot clock, the effectiveness of this strategy is further amplified because the offense must spend time getting out of the trap zones.

Why Use Funnel Down?

This defensive system provides coaches with a versatile set up, adaptable to almost any talent level. Funnel Down can be paired with any base defense. It doesn’t matter if a team normally runs man-to-man or zone, funnel down can work either way.

When used correctly, this system disrupts any offense by keeping the ball on one side of the floor. Funnel Down seeks to “pin” opposing offenses to the sidelines and forcing them into traps. This creates an urgency in dribblers that often speeds them up to a point where they are uncomfortable. By speeding up the dribbler, the offense becomes more mistake prone, leading to game-changing turnovers.

And this defense can be taught by any coach, to basically any team. The lesson linked below provides all of the video tutorials, drills and practice plans needed to implement this system. Funnel Down might be the only defense a team needs!

The versatility of this set up allows for any type of athlete to be used on the floor. The defense creates difficult angles for passing and shooting, especially once the ball handler enters that baseline trap area. Funnel Down uses the sideline and the baseline as extra defenders to leverage pressure on the floor.

Incorporating this system into your routine forces opposing teams to spend extra time preparing. That ultimately robs opponents of time to prep for other parts of their game plans.

For more on how to implement this game-changing defensive system, Click Below for the Limited Time Offer!

Click Here for More about the Funnel Down Defense!

Related: What is the Funnel Down Defense?