The Box Set offense in basketball stands out as a popular offense because it is purposefully designed to get easy buckets. This offense requires precise movement and timing, but when properly executed, the box set leads to scoring opportunities. These sets incorporate both on-ball and off-ball screens, and can be deployed against both man-to-man and zone defenses. The box set can also create certain three-pointer opportunities.

Unlike the Box Set Isolation play, this set is designed purposefully to get an open look at a three-pointer for your team’s best shooter. Ideally, this set begins with the same alignment as other Box Set plays in your playbook. This helps prevent opposing defenses from immediately recognizing the play. Having the same set up also makes scouting your team more difficult.

This box set three-pointer generates a wipe open look for your team’s best shooter when executed correctly. The most important part of this set is that the screeners must be shoulder-to-shoulder on both screens. If that happens, your shooter will be open a lot.

This box set begins with your two bigs, players 4 and 5, occupying the elbows. Your two wings, players 2 and 3, start off on the low blocks.

The point guard dribbles up and the box set three-pointer play starts with player 3 popping to the wing. Player 1 passes 3 the ball and cuts to the opposite wing. As the pass takes place, 2 fills the strong-side low block vacated by 3.

Once 3 has the ball on the wing, player 5 sprints across and stands shoulder-to-shoulder with player 4 at the elbow, free throw line extended.

3 uses the double ball screen and puts pressure on the lane, with 1 spread out wide for a potential kick out. 3 can attack the basket at this point if the defense overplayed on the wing. 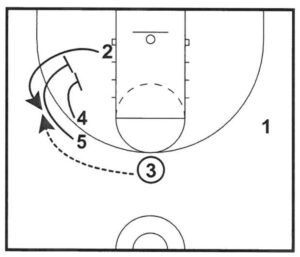 The box set three-pointer play’s progression continues with players 4 and 5 pivoting to set a second screen.

4 and 5 stay shoulder-to-shoulder and drop to set another double screen, this time for player 2, ideally your team’s best shooter. The key to this second screen is setting it well below the three-point line to give your shooter space behind the arc.

Player 2 uses the double screen and curls up the floor. The shooter must have his hands ready to receive. This is a catch-and-shoot opportunity.

Player 3 drives toward the land, but picks up his dribble and reverses his stance. He hits player 2 coming up following the off-ball screen.

If players 4 and 5 set their screen properly, this box set should get your best shooter a wide open look at a three-pointer. Player 1 can drop for an offensive rebound opportunity. Player 3 remains high as an outlet to reset the offense if the defense covers the shot.