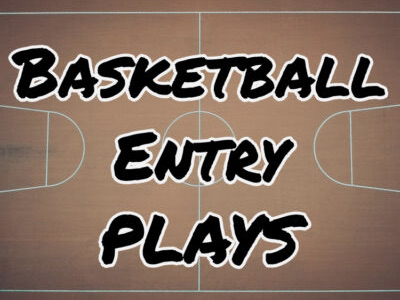 Every basketball coach needs to be clear on their vocabulary for their team. Some basketball terms are interchangeable, while others are wholly unique. When discussing the concept of basketball entry plays, a coach might think of an inbound play like a SLOB or a BLOB. But an “entry” can also be considered any play that gets the offense going, providing both quick hitting options as well as getting into a continuity offense.

Sometimes, these plays are described as “false motions” or “decoy motions.” Regardless of the terminology, coaches need plays that deal specifically with pressure. Pressure-release plays must combat defenses that overplay or deny passes to the wings or the post. 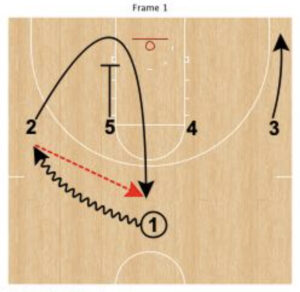 This play begins with using the 1-4 High set.

1 starts with a dribble entry to the wing. As 1 makes his way to the wing, 2 imitates a zipper or loop cut.

2 cuts down and loops around 5, who provides the down screen.

As that action is taking place, 3 cuts to the corner as a decoy action.

This initial action might get an open look for 2 at the top of the key.

Any defensive overplay might result in a dump down pass to 5 for a layup. 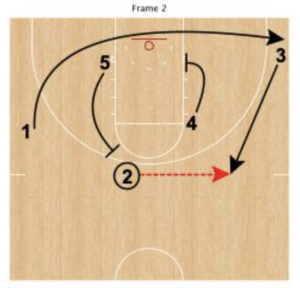 3 pops up from the corner to receive a pass on the wing.

1, meanwhile, cuts from the opposite wing to the strong side corner. He cuts along the baseline, receiving a screen from 4 at the block to free him.

2 reverses the ball to 3 on the wing. Once that pass has happened, 5 provides a flare screen for 2. 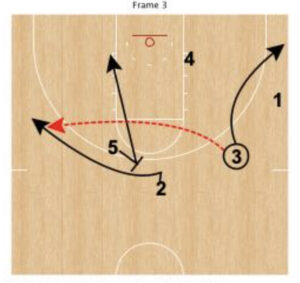 The final sequence of this play sees 3 make the decisions. He might be open, or 1 in the corner, or 4 on the block.

3 can also skip pass to 2, whose flair screen might see him open on the opposite side. Depending on how the defense plays it, 5 might slip the screen for an open layup as well.

The value of a play like this one remains the pressure-release aspect. If a defense overplays or denies certain passes, preventing a team from initiating a continuity offense, then a set like this one provides a useful counter attack.

If this sequence hasn’t produced a good look, the offense can immediately shift into a continuity offense set.

Related: What Everyone Gets Wrong About The Princeton Offense