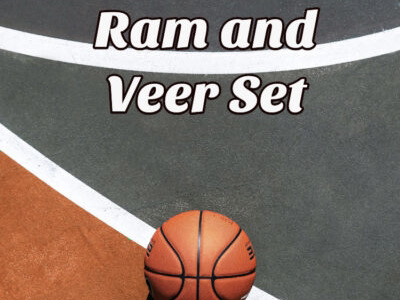 Coaches with talented playmakers often face a similar defensive set up: high-pressure in the half court. To combat this pressure, a coach might incorporate a high screen to free up the ball handler. But defensive-minded coaches can counter in a variety of ways. Defenses can blitz the pick-and-roll, hard hedge or trap. Enter the Ram and Veer offense.

Each defensive counter is specifically designed to get the ball out of the playmaker’s hands. Once a playmaker surrenders the ball, getting it back within the flow of the offense can prove problematic. The Ram and Veer offensive sets get multiple actions going, so the defense can’t key in on one specific player. 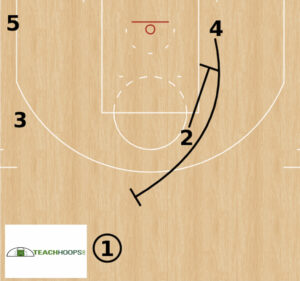 The vast majority of basketball teams, regardless of level, incorporate some sort of pick-and-roll action into their base offense. The pick-and-roll is such a fundamental action in basketball that it filters from the top (as a staple of all NBA offenses) down the the lowest youth level.

But defenses can key on particularly talented playmakers to remove the ball from their hands. To combat potential defensive counters, a coaches can install Ram and Veer offense actions.

“Ram” designates an action where a smaller player screens down on a big’s defender to free the big to set a high ball-screen. This action frees the big to set the screen without his defender immediately engaging in some blitz, hedge or trap.

“Veer” designates an action where a player who has just set a ball-screen, immediately moves into an off-ball screen for another player. The initial screen is sometimes called a “ghost” screen, then, instead of rolling to the basket, the screen moves into a wide pin-down screen for a teammate away from the ball.

The Veer action preys upon a defense’s “tag” of the roller. In the image above, 5 sets the ghost screen for 1, then immediately moves into the veer action. Typically, 2’s defender is tasked with “tagging” the roll man in a high pick-and-roll, so he’d cheat off his man. But the veer action sets the pin-down screen for 2, freeing him up completely.

Depending upon how aggressive a defense is when handling the initial screen action, Veer also creates the opportunity for the screen to slip for an open layup.

The first play that would be useful against aggressive, trapping defenses, relies mostly on the Ram action. For this play, 3 should be the best shooter on the floor. 1 executes a dribble hand-off (DHO) with 2, which is largely a decoy action. From there, the play progresses quickly.

1 and 2 initiate the action with the DHO on the wing, while 3 begins the Ram action with a down screen for 5. 5 sprints to the top of the key, where he completes a ball-screen for 2, who is attacking off the initial action. 5 rolls as 2 turns the corner.

As this action is unfolding at the top of the key, 3 gets a pin-down screen from 4 to free him up on the opposite wing. So, as 2 attacks the lane, his options include 5 as the roll man, 3 for a kick out, or keeping the ball for an elbow jumper or layup. If 4’s defender overplays the pin-down screen, he can slip for a layup. 1 remains an option for the throwback pass as well.

This action is particularly useful at the high school level to combat overly aggressive defenses. This core actions also appear regularly at the NBA level.

This next play option incorporates both the Ram and Veer actions into the offense. The initial set up for this play implements a double-stack under the basket. The shooters execute a floppy cut to get open on the wings, an action that’s particularly effective at the high school level.

From there, the action of the play unfolds. 1 hits 2 coming off the floppy and immediately initiates the Ram action. 4 races up to set the ball screen for 2. As that’s happening, 1 cuts off a screen from 5 along the baseline and occupies the strong side corner. 2’s first look, before using 4’s screen, should be the corner.

If the corner pass is there, 1 receives and either shoots or immediately attacks the defense. If the shot isn’t there, 5 initiates a back screen for 2, who cuts. After the back screen, 5 enters into a ball screen for 1, who attacks from there.

If the ball doesn’t go to 1 in the corner, 2 has the ball screen from 4 (Frame 4 above). This becomes the Veer action. 4 sets a ball screen, then sprints into a pin-down screen for 1. 2 attacks into the lane as 1 lifts on the wing. 5 can seal his man for either 2’s layup opportunity or for a dump down. 3 occupies the opposite corner. 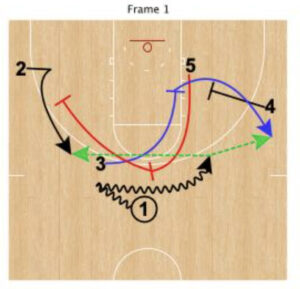 Ram and Veer use several actions to free up ball-handlers and create opportunities on offense. These actions can be particularly useful against overly aggressive defenses that like to blitz, hard hedge or trap screens.

It’s important when teaching screening at practice that the screeners know to sprint into their screens. If a player jogs to the screen, this allows the defense to adjust and defeats the purpose of the screen itself.

This last play option combines the two actions into one quick hitting option. This is a useful after-timeout play call, or even as an end-of-game situation.

The action sees 3, the team’s best shooter, set the Ram screen for 5. 5 sprints into the ball screen and immediately cuts into the Veer action. 5 does a pin-down away from the ball for 2, while 3 receives a down screen from 4 on the opposite wing. 1 uses the initial ball screen and pressures the defense. 1 can pass to either wing off this set, or attack on his own.