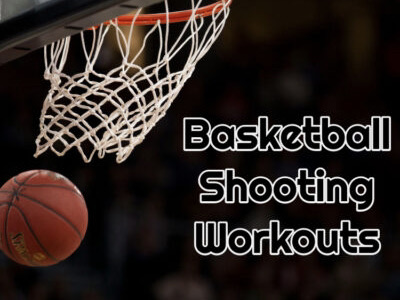 Developing the right series of basketball shooting workouts remains one of the most important aspects for any basketball coach. No matter the level of the team, the correct drills that teach and reinforce fundamental skills stand as valuable part of any practice plan. 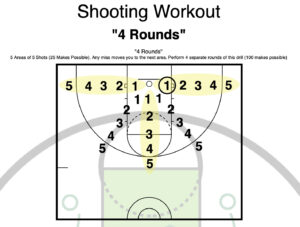 The first drill to consider incorporating into your basketball shooting workouts is called “4 Rounds.”

This drill can be done individually or within a small group setting.

For this drill, the shooter progresses through a series of spots in the half court, focusing on form and rhythm.

The first two shots from any of the sections remains a form-shooting attempt. The player should use only one hand and focus specifically on release and spin.

The next two shots build on the form-shooting element, now incorporating the guide hand. But with these shots, the shooter still does not leave the floor with the attempt. For the final shot in the section, the shooter steps beyond the three-point line and shoots from there. That attempt should incorporate all of the fundamentals for proper form, elevation and release.

As the shooter progresses through this sequence, they must keep track of their makes. Any miss moves the shooter to the next section. The goal of the drill is to make as many attempts as possible while maintaining proper form throughout.

The name “4 Rounds” comes from the drill’s set up, since every shooter progresses through the drill four times. 100 stands as the most points a shooter can score.

One way to stress proper form with this drill is to require “perfect shots” with the first two attempts in each section. A “perfect shot” is one that’s made without touching the rim. This can also be adapted to be a useful competitive practice game. 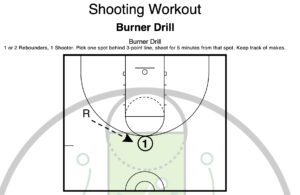 The next drill a coach should consider adding to their basketball shooting workouts is called the “burner drill.”

The “Burner Drill” stands as a useful sequence either in pre-practice warm up or in post-practice wrap up.

For this drill, a single shooter takes three-pointers for five minutes. One or two additional players provide rebounding and passing support for the shooter.

As the shooter navigates the five minute time limit, he or she should focus on form and elevation. The shooter must set his or her feet before each shot attempt. Shooters should also get in the habit of preparing to shoot before the ball even arrives in their hands.

Shooting for five consecutive minutes often leaves the shooter gassed. The drill “burns” the shooters energy. But it’s important for the shooter to maintain the proper form even in the closing moments of the drill.