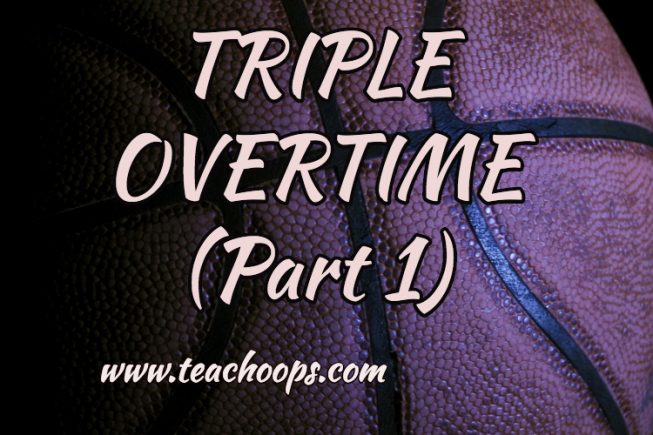 It’s late in the 4th quarter, the shot clock is turned off, the game is tied, and your team has the ball. We’ve all been there before, as either a coach, player, or both. Standard operating procedure is usually to call an immediate time out if available. This can happen after a rebound or a turnover. This is usually the moment when many coaches exhale with the comfort that overtime is the worst possible outcome, barring any disastrous miscues. Unfortunately, this standard operating procedure that so many coaches lean on. This quite often leads to the same standard operating results that so many coaches regretfully look back on.

This misplaced trust in the safety of overtime can usually be traced back to three crucial parts of the end of regulation. The final minute, the final possession, and the final play. The team that consistently makes the most of these 3 parts will always have the best opportunity to win in regulation and avoid overtime (and especially triple overtime). First, it’s important to ignore the general notion that a tie game in the final minute is a time to be conservative. In actuality, it’s the perfect time to be aggressive. Because it comes with the guarantee that any failed offensive possession. At worst, it can only result in a 3 point maximum deficit on the other end. That’s excluding the rare exception of giving up a 4 point play.

With this in mind, the smartest way to apply aggression in the final minute, is to attack the basket. This eliminates the pressure of having to connect from outside in such a hostile shooting environment. It also potentially places your opponent in serious foul trouble and provide the opportunity for making the possible game winning free-throws. Bottom line, the final minute of any tie game is a time to be aggressive an. Avoid overtime at all costs. In fact, the final minute of regulation should always be approached as if overtime is not an option.

If a win or a tie were the only two possible outcomes, then most teams would be much more aggressive in the final minute of regulation. Especially at the end of the regular season, when many teams are fighting for every possible victory to make the playoffs. Ironically, most of those teams would not be in that position if they played that aggressive in the final minute of every game. It’s all about having the proper perspective for the current moment. Because many coaches and players instead have the “next” mentality. They’ll say things like this. “We’ll get it next play,” “next quarter”, or “next game.” Although attempting to be positive, this way of thinking doesn’t put enough emphasis on the current moment. In basketball and in life, that’s the only moment that should ever matter.