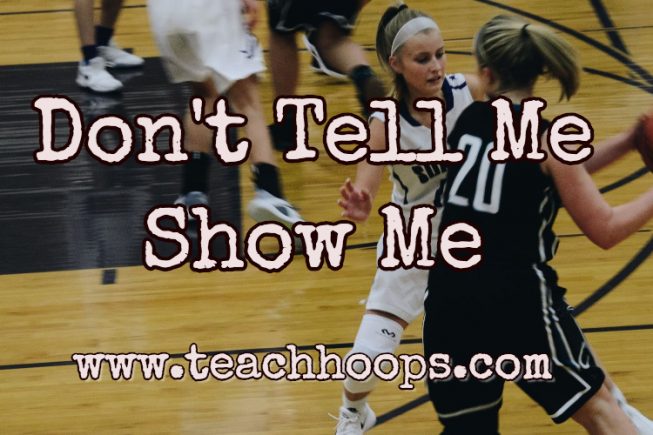 The Legendary Clint Eastwood once said: “You can say more with your mouth closed than you can with your mouth open.” Unfortunately, in today’s society, most young people learn only how to talk about taking action, but very few learn how to actually do it. To demonstrate basketball leadership effectively, you need to show it, not just say it.

The best leaders in life, are the one’s who lead by example. And although communication is the cornerstone of every great team, the most important thing any player can do is let their actions speak while leading their teammates into battle. It’s the same thing when a player makes a mistake, and tries to atone by using phrases like: “my bad” or “my fault”.

These hollow apologies can become contagious, and eventually create a culture of excuses. The only response that should ever be accepted for making a mistake, is learning from it and correcting it as soon as possible. Especially in game situations, when uncorrected mistakes and excuses can deflate a team faster than anything else.

Players should be quick to address the cause of their mistakes, and even quicker to move on from them. A short memory and a closed mouth can restore order amidst in-game chaos faster than any excuse can. And moving on to the next positive play keeps bad possessions from turning into bad stretches, or even bad quarters.

This makes it possible for the team to maintain closer connection to their opponent more often, which increases comeback opportunities by limiting deficits. This action-based mindset is a valuable asset to any player and team, but it’s an ongoing process that begins as soon as every new player arrives to the program. The earlier it’s instilled in each player, the more it can be cultivated in every practice and eventually every game.

From Talk To Action

The steps to shifting your team from talk to action are simple.

First, implement a strict punishment policy in practice whenever a player either makes an excuse for a mistake or begins to talk too much about execution, without actually delivering. Extra running or push-ups for the whole team following each infraction is a punishment that works very well.

Second, is adding a brief stretch to each practice known as “Silent 5”, in which the entire team must be completely silent for a full 5 minute scrimmage. Any talking of any kind will result in punishment for the whole team following each infraction. This will encourage the team to rely on their actions and instincts, rather than their words.

Lastly, comes the final measuring stick for a successful shift in mindset. And that’s incorporating the concept in actual games. Punishment at that point will be decreased playing time instead of extra running or push-ups. Follow all 3 steps carefully, and repeat them each practice or game, and you’ll begin to see a solid shift in mindset.

Teachhoops.com For Coaches who want to get better