Death of a Basketball Season 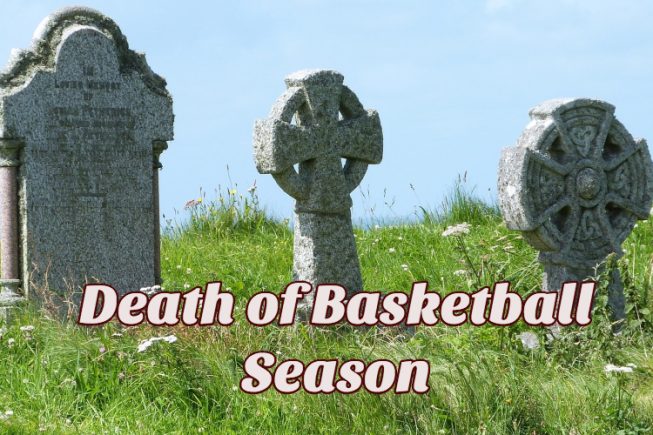 This is a conversation between PGC founder Dena Evans and a High School Player. What a great conversation about between coach and player. It touches on the death, or end, of a basketball season.

Death of a Basketball Season

I’m writing to share with you some feelings I’ve been having since my season came to an end. I am hoping that you will have some insights or thoughts to pass along to me.

First, let me just give you some facts about my season so you get a general overview. We finished 18-6 in the regular season. We won our first game and lost in the semi-finals to the team who won comfortably in the finals. Our game against them was a close game.

What I’m basically feeling is a strong sense of disappointment and sadness.

Last year, I was upset that we had lost (in the first round of the playoffs), but I was able to look back on the season and I was happy about it. But this year it’s a different story. I’ve been left with that feeling of wanting more, thinking about what could have happened, or how it could have been different had we won that game.

Perhaps part of it is knowing that I’ll never get the chance to play competitive basketball with some of my teammates ever again. Perhaps part of it is just missing spending time with the guys in the locker room, or out at team dinner. Either way, it’s been a tough pill to swallow for me. This year it just felt as if the dream and the goal of winning the State Championship had kind of slipped through our hands, and it was really just two games away…and the fact that I think this was our best shot, is maybe irrational, but something that makes it harder.
It’s tough to really get it all out there on the page, but that’s about the best I can do as far as explaining my thoughts for now. Any words would be greatly appreciated.

First off, congrats on a GREAT season. I say “great” not because of your record or how far you got (or didn’t get) in the playoffs. The ‘congrats’ is because (based on your email and on what I know about who you are) you gave this basketball season, your team, your coaches, your school, and yourself the very best you had to give. I realize that may sound hollow to you in this moment, but one day, when your career is over, I promise you that this will be the one thing you will be most proud of, and it’s what will give you the most peace about your career, no matter how many championships you win or don’t win.

But for now, I can totally understand and relate to everything you have said. I’ve been there. More than once…

My senior year of high school, we lost in the game to go to “State” (a big deal in Texas because only 4 teams go). My goal since 6th grade was to win a state championship. I was devastated.

My junior year, again after being ranked #1 all season, we lost in DOUBLE OT of the national semi-finals to Stanford. Once again…devastated.

My senior year, after all the best players on our team had graduated and I had become the unquestioned team leader, we played as the underdog all year. We made it all the way to the Elite 8 and lost to Ohio State in the game to go back to the Final Four when my coach called time out just as I was releasing the game-winning 3-pointer. I hit nothing but net as the buzzer sounded, but it was waived off because the ref said my coach called the time out with 0.7 seconds on the clock. That was the way my college career ended. Devastated times a thousand.

Unless you’re the team that wins the last game of the season, I have never been able to figure out how to feel anything *but* sadness and disappointment at the end of a season, at least for a while.

I think you just need to allow yourself time to grieve. The word “grieve” may sound crazy because I know it’s not like anybody died or there was any great “tragedy.” But you *have* suffered a profound loss. The death of your basketball season (which you cared deeply about) is difficult. You will never play on this particular team (which you gave so much of yourself to for so many months) again; and you will never be high school teammates with some of those guys again (and those kinds of bonds are rare and special and hard to replicate in the “real world”).

People who have never experienced those kinds of losses can never understand just how much all of that hurts. You gave yourself completely to something, and it didn’t turn out like you wanted. And to make it even worse, now it’s gone. Over. Done. That’s hard and it hurts.

But (and this is the part you probably don’t want to hear, but it’s true so I’ll say it anyway…) that’s how life works. Everything passes. You’ll eventually lose everything-your parents, your friends, your health, your pets, your youth, and, inevitably, your life. It’s all gonna pass away, just like this season, and this team.

Which, to me, is all the more reason to give those things you love and care about everything you’ve got. It all goes by so fast, and the ONLY thing you’re guaranteed is that it WILL, in fact, go by.

This can all be pretty depressing UNLESS you just accept it as reality (because it is), and THEN you can be freed up to focus all your energy and attention on giving every single moment of the rest of your career the very best you’ve got….which brings me back to my very first point in this email.

As the seasons go by, and as you experience the feelings of sadness and disappointment that you’re experiencing now, and as you begin to get a clearer and clearer sense of the finite-ness (not sure if that’s a word) of your career, your sense of urgency will grow exponentially. That’s why seniors often play with such care and passion. It’s why aging superstars are willing to take less money and less playing time to get on a team that has a chance to win a championship. You begin to realize what matters and what doesn’t, and you begin to sense how precious an opportunity it is to get to be an athlete who’s playing for something that matters with people who matter to you.

So my point is…everything you’re feeling right now is appropriate and even good. Don’t resist it. Be sad. Be disappointed…Until you’re not anymore (and it will go away, I promise). And then, you will do what every great athlete and every great hero does…you will pick yourself up, dust yourself off, dream your next dream, and you’ll go at it again…even though you know the risk and how much it will hurt when it’s over. But really, that’s the only way to fly in my opinion. Way more fun, exciting, meaningful, and fulfilling than living a life where you play small and never put your heart on the line for anything that matters to you.

And one last thing…while winning a championship *would* feel really sweet and could be incredibly rewarding, the truth is that even THAT feeling will pass after a few weeks or even days.

And then you would STILL have to feel the sadness and disappointment of not playing with some of your teammates again and of not ever having this particular team together again. So don’t fall into the trap of believing that winning a championship will make you not have to feel the pain of the ending of something you love. Granted, it would make it a lot easier and is the preferable way to end a season. But what’s *more* important is always that you gave your best in every moment, regardless of whether or not you were fortunate enough to be on the team that won the last game of the season.

Those are my quick thoughts. I’m really glad you decided to write me. You’re doing big things, even though you may be feeling like you came up short this season. These are important conversations and important life moments, and it’s an honor to get to share them with you.