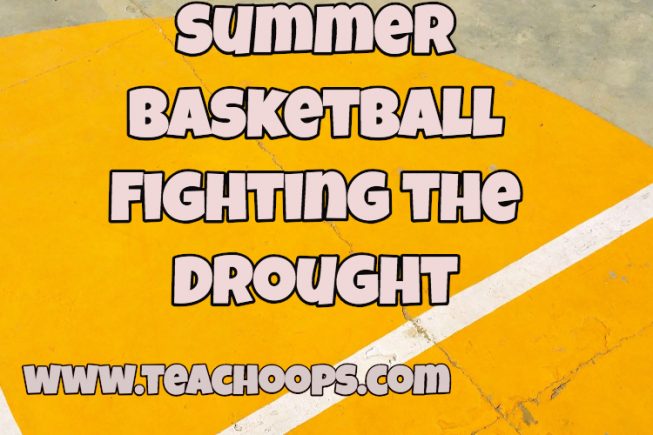 With the sweltering heat of the summer months on the horizon. The fear of drought can overtake even the best of teams. And only the vital summer rain can keep the fields fresh and the crops growing. Young basketball players are no different, especially freshmen. But the rain that they require to grow is in the form of experience and guidance, provided by veteran players and coaches. A drought can strike a young player or team at anytime and in many forms. Even a brief lack of focus and dedication can be huge dangers to a young crop, especially during summer basketball.

Bad habits can also be a form of drought, which can quickly spread throughout the team if not addressed early. It can be something as simple as a poor diet, or something as complex as not properly grasping an advanced scheme. These bad habits can be compared to stubborn weeds that consistently appear in a yard or garden. Pulling them up is only a temporary solution, and the only way to be rid of them completely is to destroy the source beneath the surface.

It’s also extremely important to make a list of these bad habits as soon as they pop up. Even after they’re addressed and eliminated. Writing each one down makes them far less likely to forget about. Including when, where, why, and how they occurred. Just like the famous George Santayana quote: “Those who do not remember the past, are condemned to repeat it.” In contrast, be sure to list all the good habits as well, which can just the same be easily forgotten.

Lastly, it’s also a helpful suggestion to have all players write down their individual “Max-Out” Shooting numbers (from “Spring” Blog) as they progress throughout the summer. As the preseason gets closer, it’s best to have those numbers as accurate as possible. At this point, all routines and regiments should be carved in stone. Most players are creatures of habit, and the product of every summer break should be a strict “Game Day” and “Off Day” schedule to be followed in detail for the rest of the year. And with these details established, it’s time to tip off another preseason.