Winter Sports in High Schools around the US and World 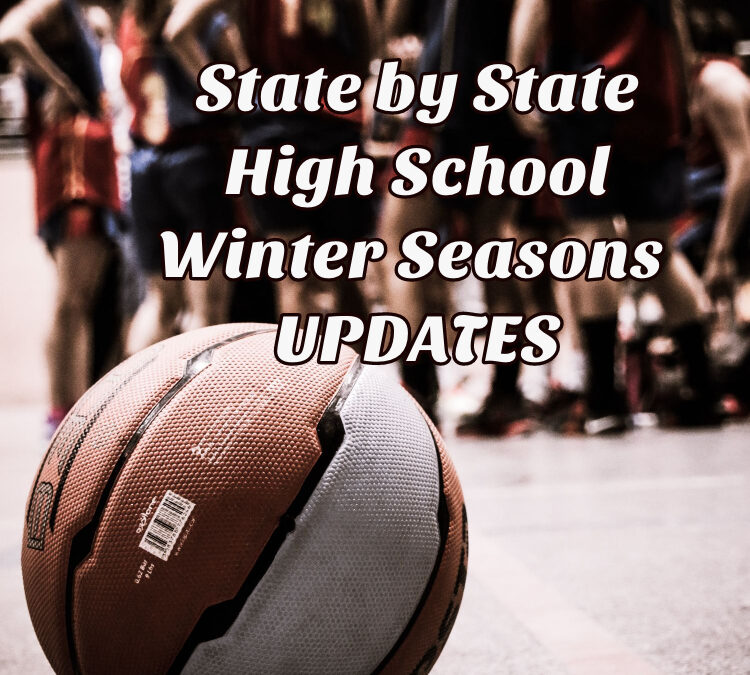 This is the Information we have received from coaches   It is quoted from specific coaches and if something is in-correct please email me at steve@teachhoops.com or reach out via social media (Twitter: @coachcollinsjmm; Facebook group–coaching basketball Click here)

starts January 11 (it appears) and will end in late March. Not sure yet on fans and the use of masks may or may not be in play for athletes!

Practice for winter season sports had begun on Nov. 9 for the counties, districts and schools that met metrics to allow for a permissible start, the AIA said. Those schools can continue to practice until further notice, the AIA said.

Limited spectators, no in season tournaments, if a conference game is missed due to COVID reasons and can’t be made up the game isn’t counted/penalized, for either school. Conferences have choice on a district tournament and how it’ll be played, our conference will probably travel to the higher seeded team.

Dates shifted, yes, but sports are also played at a different time. For example, boys volleyball is usually a spring sport, but it has moved to the same time as girls volleyball during the “fall sports” that will begin mid December through mid February. Girls tennis is usually a fall sport and it is moved back to the “spring sports” at the same time as boys tennis beginning at the end of February through early May.

The state of California has always had an 18 hour rule during the week. Games/meets/matches count as 3 hours towards that number, even if a cross country meet only takes 20 minutes, it counts for 3 hours. Plus the practice time during the week. If you play one sport a season, that is very reasonable. There will be more people trying to play 2 sports at the same time instead of making a tough decision. That 18 hour rule will be pushed big time in that case. In addition, the 18 hour rule also states you cannot double up on sports on back to back days.

Season moved back to start January. Shortened season (14 games). As of right now, play with masks, no spectators

postponed at the moment after a spike. Prior was playing a shortened season and area teams.  CT has announced we are postponed until January 19.

Have not found much looks like they are playing

is playing every county is different tho. My county (orange) is doing covid testing every few weeks. And we have several in game changes when it comes to covid. Like no jump ball to start game, sanitized ball every timeout, come to game in uniform, etc.  Fl is county to county even though you don’t have them as missing. Most counties are pretty normal. Ours unfortunately is not 1 of those. We can only play in county. We could play a tourney vs out of county teams though as long as the games were at a private school in our county.

Hawaii has  a tentative date of Jan 4….. we still have no protocol or policy

As of now, Illinois is leaving it up to the local school districts. The governor wanted it moved till spring but the IHSA is not following that guidance. Illinois is currently in limbo (at least my school is). Governor and IDPH both have said basketball is high risk and the season is postponed. IHSA has said the season will commence on schedule. Some have opted out, some are saying they’ll play.  Illinois – Health Department says NO to basketball. IHSA- sports association says we are going to ignore you and play. Most schools have announced they will not play due to insurance liability issues. Insurance companies cannot support a school knowingly going against expert health advice.
IHSA sent a survey to delay the season. They meet on 11/11/20 to discuss. Practices scheduled to start next Monday 11/16. Very few schools have committed to participate.

Playing. Coaches wearing masks, limited tickets for family pending on school, players are playing on (no masks) at the middle school level in

We are currently as normal. Some conferences are limiting fans but as far as the top goes they have only submitted recommendations.

Here is KS, we have some limitations on crowd size depending on the school (most everything is decided local) and we are not having jump balls this year to start the game, instead visiting team will start with a side out.

Seem be to playing/ No masks for players

Under the announced schedule, teams in all winter sports except for wrestling may conduct “skills and drills” practices beginning Dec. 7, with more formal preseason practices and intrasquad scrimmages scheduled to start Dec. 14.

MPSSAA in MD granted permission to begin winter sports as early as Dec 7. (First day of tryouts. MD requires 20 days of practice before competition.) However Anne Arundel County where I am just suspended indefinitely all indoor and outdoor workouts, practices and training due to a surge in cases locally. Dev 7 is now up in the air. The original plan a month ago was a 2nd semester winter sports season starting in early February.

MA… still being negotiated. Youth basketball not happening as of now.

I’m in Michigan and our players have to wear masks at all times, even while playing. Coaches, fans, and refs will be masked too. No more than 2 spectators per player/coach, no locker room use for practice, no jump balls for games. Michigan is playing but has instituted a ton of restrictions/rules. Refs can’t the ball. No jump ball. Coin flip if game goes into OT. Have to play with masks on. Etc.

18 games instead of 26 for the regular season. Section play offs, the state tournament is undetermined as yet. Two family members per player can attend. This could change as COVID-19 numbers are rising.

Seems to be playing

Missouri is playing and pretty much like nothing happened. Looking like our bench is going to be 6 feet away from each other

Nebraska currently: 25% capacity, limited to house hold members only effective till Nov 30. Masks worn by all except those on floor. No pregame or post game hand shakes. Masks on bus rides. Athletes responsible for their own water bottle during games.

Do not seem to be playing

As of now NJ is playing. Shortened season. Players are supposed to wear face covering while on bench. Not sure how that will work/be addressed. No fans at all. NJ: 14 regular season games. 1 scrimmage. Down from 25ish and 4. Home and Home with the same opponent each week. Limited state playoffs.

NM no sports at all happening In The state. New Mexico tentative start date Jan. 4th 2021 with 18 game schedule

We have confirmed with state officials that low & moderate risk winter sports may begin play on Nov. 30. We continue to examine opportunities for high-risk sports to be played with strict risk minimization efforts in place. At this time, high-risk sports are not authorized. New York recently got moved to January 4th

North Dakota is playing a full season at this point. Masks during games and practices just came down for volleyball so I expect it is coming for winter sports. We have been doing open gyms with masks.

The Ohio High School Athletic Association reaffirmed its plans Wednesday to move ahead with winter sports as scheduled, notifying athletic directors across the state while providing results of a recent survey.

Is playing.   Oklahoma we put signs up to wear masks, and social distance but games are packed like sardines and no masks. Game un changed

winter seasons slated with our athletic association, OSAA, to start December 28th with a short 7-week season. However our governor says no full contact sports which basketball has been designated, until OR phase 3 which is a long ways off… a reliable COVID treatment or vaccine is required. Oregon reduced games from 24 to 14. Season from 14 weeks to 9. Pushed start back by 6 weeks.

PA is starting basketball on time on Nov 20 with full schedules planned.  Many schools are starting to shut down

Season shortened from 17 to 10 games then playoffs.
Possibly Varsity only no JV , Max roster 15 but only 12 dress for games. Games played on Saturdays. 2 spectators per player no student fans. All players will wear masks even while playing

All subject to change

limit number of fans … follow protocols as far as distance on bench, players/coaches wear mask while on bench… HSL has recommended playing same opponent back to back (Tues/Fri), tournaments pretty much have been canceled… recommending coming dressed to games, limit use of locker rooms.. have several basketballs for use during games…

South Dakota is starting as normal. Fan limits are on school to school basis.

Game limit of 27, no tournaments. Only one game allowed during school week. —-Nov 10 Texas, 1st game today, must wear a mask while playing and on the bench. No fans allowed in the gym

At this point VA is starting winter sports on Dec. 7th with a condensed season and championship bracket.  For public schools, high schools are slated to start practicing in a couple of weeks, cutting season by about 25% of games, no spectators in the gym. I’m a middle school coach, and we are not slated to start practicing until January, have cut about 20% of the games, and only 1 parent per kid in the gym (no siblings)

No fall sports in WA State; we are supposed to start basketball on 12/28/20. Currently practicing; only 5 players and 1 coach per practice.

Gov. Jim Justice issued an executive order on Friday morning that the high school winter sports season will postponed until Jan. 11 at the earliest.

Dane County is not playing. The WIAA is going on with a season….Yes we are doing wrestling and winter sports when our state is on fire.  Our State Association has done NOTHING to push for a later start or second season.

Countries around the World

Japan. Back to Normal

Ontario, Canada (a province, not a state) is currently not playing winter sports

In Italy all youth basketball is suspended. Only the first two male and female championship are playing

England is in a lockdown until early December so just about all competitive matches put back to a January 2021 start.

Sydney, Australia – we have been playing since July (on and off). No masks but at times no spectators. All change rooms are closed so you need to turn up in your gear. Players must sanitise hands as they sub in and out as well as out of timeouts and breaks between quarters/halves. Now each player is allowed one spectator to any indoor sport but spectators must remain socially distanced. Seems to have worked well so far.