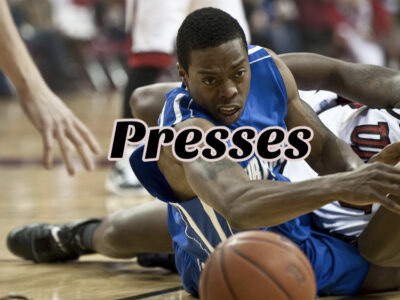 When talking about basketball full court presses, coaches refer to the defensive tactic of applying pressure on the offense the entire length of the floor. Depending upon the style of the press itself, a defense might pressure the ball before it’s even been inbounded. Well-drilled teams often find the use of a full court press to be a game-altering proposition.

Before deciding on a press, coaches must understand the limitations of their team. The defense must be well-conditioned and disciplined in order to effectively use a full court press. If not done well or correctly, the full court press might surrender easy scoring opportunities on the other end.

The reasoning behind implementing any style of basketball full court presses remains applying pressure to the offensive unit. Presses allow the defense to control the pace of a game. Presses also allow for the defense to create transition opportunities on offense.

If a team is trailing in a game, a full court press might provide the best chance at scoring quick buckets. The press could result in a turnover, or it might force the offense into a quick shot on the other end. Either of those outcomes provides the defense with another opportunity.

In states where the games are played with a shot clock, using a full court press can burn valuable seconds off the clock. Presses often result in lob passes across the court, which rob the offense of their time.

Implementing a consistently, high-energy full court press also affords the coach with the ability to expand the team’s rotation. Having 10 to 12 players capable of performing at a high level will leverage these high-energy attacks.

While there are a number of variations available and different vocabularies, basketball full court presses often boil down to a few basic set ups.

A full court man-to-man press creates a chaotic, scramble environment that allows the defense to control the pace of the game. This option can incorporate a ball-denial approach for every player, or for specific offensive players. An initial overplay might dictate where the ball gets entered. From there, the man-to-man press allows for multiple trapping opportunities in both the full court and half court.

A soft version of the man-to-man full court press might simply force a zig-zag break from the offense, which would burn valuable seconds and might disrupt play timing.

The 2-2-1 press might be particularly valuable to a team that uses a 2-3 zone, or some other configuration, as its base half court defense. The 2-2-1 full court easily folds back into a half court zone. It also applies pressure to the ball and forces the offense to use the sidelines. This pressure moves the offense into potential trapping areas and tries to key to ball out of the middle of the floor.

The 1-2-1-1 or “diamond” seeks to trap the initial offensive pass. This press often allows the offense to initiate the action to a specific spot, then converges from there. The trap applies immediate pressure deep on the floor, so any turnover can be quickly turned into an offensive opportunity.

What to Consider Before Installing a Press

Coaches must evaluate their roster before deciding which full court press will be most beneficial. Some of the other considerations include: when to press, and when to remove the press.

Many presses are implemented following a made field goal, made free throw or off a dead ball. Coaches might mix and match their approach, but those are typically the options. The decision to remove the press usually comes when either the opponent easily navigates the pressure, or the defense is not running it properly. Zone presses often fold back into half court zones at a given point.

Trapping the basketball provides the defense with its most high-leverage play in any of the full court presses. But coaches must be clear regarding the expectations for their team when trapping, both on and off the ball. Are there specific areas on the floor that always signal a trap? What do the weak side defenders do?

As with anything, communication is key to a successful full court press.

Click Here for Coach Ted Anderson’s Pressing and How to Teach It PDF packet.